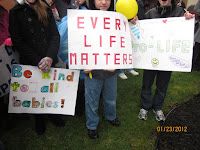 "We hold these truths to be self-evident, that all men are created equal, that they are endowed by their Creator with certain unalienable Rights, that among these are Life, Liberty and the pursuit of Happiness."
-United States Declaration of Independence
Posted by Laura @ Life Is Beautiful at 1/25/2012 06:07:00 AM No comments:

What to do with all those Christmas cards... 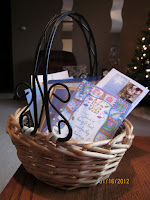 I know I'm a little behind most of you in just taking down our Christmas decorations last weekend, but I couldn't part with them! I love the twinkling lights on the tree in the dark mornings and evenings...

You may already do this with your old Christmas cards, or perhaps you like to save them or scrapbook with them, but I'll share this sweet tradition from my family anyway.

Instead of just tossing them into the trash as you take them down, gather them into a basket. Each morning, take one out and pray for the sender at that time and perhaps even throughout that day. 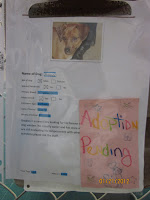 Happy New Year, dear friends! I pray that this year is one of digging ever deeper into the well of abundant graces from the Father.

On the topic of new things…here are a few fun updates:

-We are adopting a dog. Yes, this little guy is coming home to us this week. I don’t know exactly how it happened but one look at his puppy face and it all makes a little more sense... 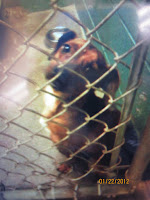 -I joined The Catholic Young Woman as a contributor, thanks to the beautiful and talented Clare. I’m excited to be a part of this new ministry as well as getting to know the girls who write it and
the girls who read it. Feel free to stop over even if you’re not Catholic or young or a woman!

-GIVEAWAY ALERT! I think that blog giveaways are super-fun and have been wanting to try it out. Check back soon for my very first giveaway—I’ll give you a hint: nothing spectacular but it is handmade.

Also, don’t forget those marching for life in Washington D.C. today and around the country. PRAY. Speak the truth in love. Be a part of the local right-to-life marches in your county today. Spiritually adopt an unborn baby in danger of abortion and pray that his or her life be spared (I ‘adopt’ a different one each year on my birthday)—maybe they’ll thank you in heaven someday!

I was driving the familiar route by the river to visit my parents (yep, “over the river and through the woods…”) when an old worship song came on the radio.

Everlasting, Your light will shine when all else fades
Never ending, Your glory goes beyond all days
And the cry of my heart is to give You praise from the inside-out. (-Hillsong)

I went from absent-mindedly singing along to praying the words I sang. I felt it deep within me. His everlasting light was in the streaks of the sunset. His never-ending glory was in the water thundering over the dam. And in the midst of nature and music, my heart was crying to Him with praise.

I knew it had been awhile since I’d heard this song…but singing it made me realize how long it had been since I had worshipped.

I pray every day.

But do I worship every day? Do I look beyond my needs, my desires, even my prayers for others and my thanksgiving for blessings…do I stop thinking of myself for a moment to simply worship Him for WHO HE IS?

Email ThisBlogThis!Share to TwitterShare to FacebookShare to Pinterest
Labels: quote

Sunday night blues. Monday morning blahs.* There’s something about getting up early and going to work that can be a struggle some days!

I love my job. I love my morning prayer time. But getting in that car and driving down snowy roads on a cold winter morning while the heater attempts to wake up…can take some effort. (You know the feeling, northern friends?)

It was on one of those icy morning drives that I felt a few worries pulling me as low as the temperature. God is bigger, I kept reminding myself as I put my turn signal on. He is bigger than any of our worries and burdens.

As I turned onto the main street, I was met with a tangible example of how big our God really is: a breathtaking sunrise with marshmallow clouds and paintbrush colors. Beautiful extravagance. From a God very much involved in the details of our lives. 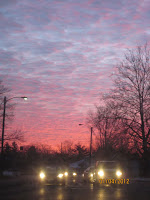 The voice on the morning radio station was singing lyrics to match:

You are more than flesh and bone
Can’t you see you’re something beautiful…
He wants you to see…
That you’re not just some wandering soul…
You are someone worth dying for.**

I saw a young woman through my passenger window. She was walking on the sidewalk through the wind, head down, shoulders slumped.

I wanted to tell her that He’s bigger. 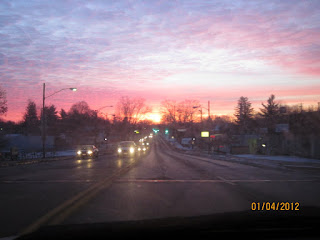 *yes, I know. I work part-time, so mine are more like Tuesday night blues...

T’was the night before Christmas Eve…

And I was stopping by the nursing home with a handful of cards that my CCD students had made for the residents. It had been a tiring day at work but I only had 10 cards and I knew it wouldn’t take long to hand-deliver them.

I asked the desk nurses who might like a Christmas card or who doesn’t often have visitors and they quickly pointed me down the north wing.

But eleven souls given a gift.

Mine just couldn’t be pinned on a bulletin board.

I stepped into a room with two small, white-haired women. One was reclined in her bed watching TV. The other was cuddled under heavy blankets and appeared to be sleeping.

The first one was absolutely delighted with her simple, teenager-designed Christmas card. "Beautiful," she kept saying. "So beautiful." Cheerful and child-like despite her grim surroundings. You’re the one that’s beautiful, I thought to myself, as she chattered away about the beautiful card and the delicious food and the nice people.

The second lady was awake by then and enjoyed her card, though more quietly.

“Is there anything I can do for you, or pray for?” I asked on my way out.

“Just pray for us,” they replied in unison, their eyes and wistful smiles saying as much as their words.

Just as I stepped through the door to leave, I heard the quiet one’s voice again.

I blinked back tears as I turned around. Who was this woman? What was her story? Where was her family? Did she yearn for love, to give and to receive it? To have someone to say “I love you” to?

But the answers didn’t really matter at the moment. It was simply God speaking in two souls to each other. So I held back the tears and smiled with my reply...

"Eliminate physical clutter. More importantly, eliminate spiritual clutter."
~Terri Guillemets
(this sums up one of my New Year's resolutions--have a simple heart)
Posted by Laura @ Life Is Beautiful at 1/11/2012 06:54:00 AM 1 comment:

Email ThisBlogThis!Share to TwitterShare to FacebookShare to Pinterest
Labels: quote

"At the end of the day, you can either focus on what's tearing you apart...or what's holding you together."