He Is Shaping Us 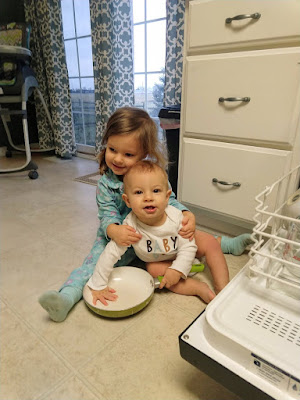 I sighed as I stepped in a puddle of water on the kitchen floor as I microwaved some leftovers for my daughter to eat for lunch in front of the TV. The baby was sniffling through his fifth cold of the season as he attempted to nap on me in the carrier.

Can you say #momfails? A messy floor. Radiation from the microwave. Box mac and cheese. Screen time. A babe that doesn't sleep like the books say he should. I promise I don't do those things all the time...I do cook from scratch, come up with creative games, clean my house...but you know, sometimes I don't.

Motherhood isn't kind to the perfectionist. Prior to motherhood, I was fairly successful in education, the workplace, the social front. But motherhood has brought me down peg after peg after peg as many days end with a nagging fear that I'm not enough. I deeply, deeply love my children and am indescribably grateful for them, but some days I feel like the role of motherhood is ruining me. Where is that girl who was so successful...now hidden under messy buns and piles of laundry and self-doubt? So much of my weaknesses have been exposed, my limits have been reached. I've been painfully made aware of my lack of control when it comes to outcomes from my efforts.  It can be discouraging to feel like I'm not doing this whole vocation thing "right."

God has recently been speaking to me through Isaiah 64:8 about the potter and the clay. He's been showing me that even on the days when I feel anything but beautiful and purposeful, He is still at work and is using these moments to make me into the woman He's called me to be. He is shaping me through everything He allows into my daily life. So those moments that I feel squashed by my inadequacy in motherhood?

They're really squashing the false notion that I'm in control.

They're squishing the belief that I can be perfect by my own strength.

They're squeezing out the selfishness of my flesh, the pride of self-sufficiency, and the temptation to measure my worth by what I accomplish in a day.

They are shaping me.

The kneading and molding is hard. Yet it's so important to be soft and open to His hand, remembering that the Potter is also our Father, a loving Father. By His grace, I've had the eyes to see this more and more lately. I'm less resistant to the molding and more expectant and hopeful to see parts of me taking shape. I'm trusting more in the beauty He's creating through this process-- and I'm seeing glimpses of it!

Instead of lamenting that I'm not enough or I can't do this on my own, I'm finding strength and joy in those realities because I'm growing closer to the One who IS enough and who never asked me to do it on my own. It's only when we realize our own inadequacy that we turn to Him for grace and help-- and find it in abundance. There's a release and a relief to learn that we aren't in control, we don't have to be perfect, and our worth has nothing to do with success.

So even if it's a mac-and-cheese-in-front-of-the-TV kind of day...maybe that's not a #momfail. Maybe it's just one more opportunity for me to peacefully and trustingly open my hands and heart to God in the midst of the crazy and allow Him to shape me.

Where in your life do you feel like clay being squished and kneaded? Can you see God shaping beauty from it? 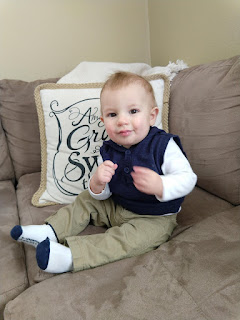 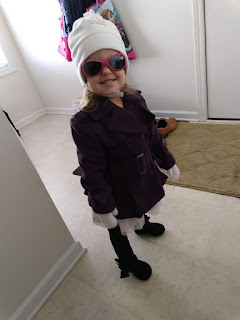 My time for typing or writing is so minimal these days as we work on getting the baby to nap in his crib as well as just juggling two different naptimes in general for the kids. I tend to use any free "creative" time to write for CatholicMom.com, write in the kids' baby books, journal in my real-paper journal, or work on our family photo book (and then of course the housework, haha). All of which are good, but I love the moments when I can just sit and write with no specific purpose or deadline.

It's a new year. And man, was last year a Big Year. I'm ready for a fresh one, one with smaller events and smaller emotions for sure. Yet it's been helpful for me to reflect on the past year as I ponder what changes I want to make in this one. Though welcoming our son was the most amazing and beautiful event of 2018, there were a lot of Hard Things we dealt with last year. I had postpartum depression. We had a homeless man live with us in the summer. Neither of our kids slept well so neither did we. We almost adopted a baby who was scheduled to be aborted (like met with the social worker and everything...but the mother decided to parent.). My husband's work and renown continued to grow bigger while I learned to grow smaller and more hidden as a stay at home mom of two who were sick almost constantly this fall. All in all, it was just a challenging year. But we survived and we're on the other side of it. With each other and two precious children. And a whole fresh year ahead of us.

The hard stuff of 2018 found me at the end of it humbly admitting that I've gotten into a rut of negative thinking. I realized in a twisted sense of coping, I'd begun to look more at the hard things instead of the good things. A friend and I were both talking about our difficult 2018 and we both realized that even though we both had had some challenging events, our attitudes were almost leaving us more defeated than our actual circumstances. It's a hard truth but a profound one, and for me it's where I find hope for the New Year. I can't predict or change what will come, but I can foster more grateful, hopeful, positive attitudes and reactions to whatever events it holds.

My word for 2019 (for the first time chosen by someone other than me, thanks to Jen Fulwiler's random word generator) is HOLD. There's a lot of meaning in that for me and I have a feeling it wasn't such a random word (looking up at you, God! Hold onto my peace. Hold my babies and live in the moment. Hold back harsh words or criticism (self-talk too!). Look for ways the Lord holds me. I also have some more practical goals for the year. Look for a post on those coming soon (for accountability...it's always better when they're written down in one place!).