We walked into the Children's Home.

Up until this point, I hadn't cried. (Though I'd come close to it at that chaotic airport!) But as I stood there in front of two dozen metal cribs in the first room, each with a skinny Haitian babe looking at us with curiosity or tears in their gorgeous big brown eyes...I couldn't stop the outpouring of tears. 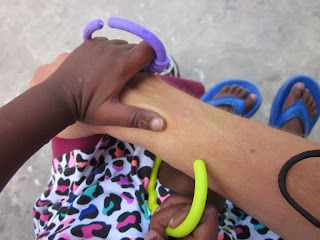 And as I picked up the nearest precious child holding his arms out to me, I knew my heart couldn't remain the same.

Over the course of the next week, we visited the orphanage often. Not all of the children were orphans, though. About 25 children were true orphans, cared for by the Missionaries of Charity sisters (love those amazing women!). The other 100 children were brought to the Children's Home by their parents, who could not care for them due to poverty or illness. Some of the children would be there for the rest of their life but some would be treated and cared for by the nuns and then return to their families, God willing.

I cannot convey all that I'd love to share about this place, the Missionary sisters, the children, and their families...but perhaps you will see a glimpse of the heartwrenching beauty of the experience through these memories from my journal... 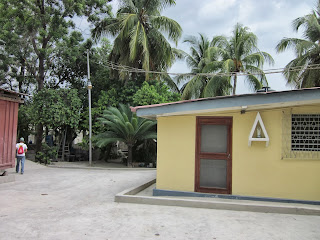 -Changing diapers, holding babies, feeding my special boy his bowl of food and watching him gain energy and actually stand up in his crib. (he was 2 years old, dear friends.)

-The precious 6 year old girl who simply held my hand and smiled as we walked. (I later found out this girl was 12 years old...broke. my. heart.)

-The impromptu 'music band' of one orphan boy drumming on a toy, another shaking a toy, and a third one singing in Creole. Joy and laughter and awe.

-Seeing three orphans get adopted. Listening to the rest of the children sing and pray for them and their new families...and for the ones left behind. Watching the Haitian woman--one of the workers--cry as she hugged the teen girl for the last time before her adoption journey across the ocean.

-Singing the upcoming wedding songs (I had committed to singing for a wedding the day after I returned from Haiti--who does that?! Crazy me) with Haitian babies on my hips as I walked through the empty orphanage church. 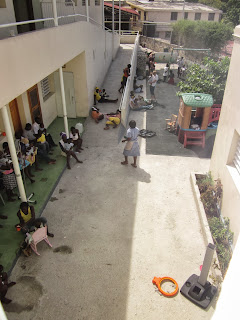 -Watching the father of two children who was visiting them cry as he had to place them back in their cribs because the bell was ringing that visiting hours were over. He himself was thin and most likely poor and hungry...but he was showing me a vision of our Heavenly Father's deep, undeniable love in a way that was seared into my memory.

-Grace and Katelyn, a mother-daughter team staying in Haiti for a month, simply because Katelyn felt called to volunteer work before she left for college in the fall. They worked tirelessly caring for the children and keeping them clean, fed, and loved. And always, always with a smile on their beautiful faces.

-The Missionaries of Charity sisters. These incredible women of God. P and I were blessed to slip into an Adoration hour behind them. Thirty of them knelt there praying before our Lord in the Blessed Sacrament, barefoot and clothed in their white uniforms with the blue stripe like Mother Teresa. This. This was how they did it. Time spent before our Lord in prayer...to have the strength to then go out and serve Him in the least of our brothers. To feed Him, clothe Him, care for Him. 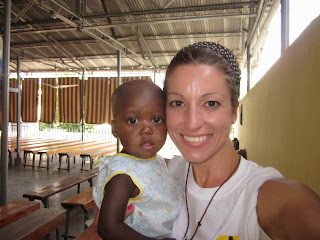 The tears just keep coming as I re-live these memories. Has it really been three months since I lived with and loved these people?

But it hurts to be so far away when all I want to do is hold those children again. See their smiles, hear their chatter, kiss their foreheads, and press them close to my heart.