Mosul. That's where Grant is stationed.

Yesterday evening I called Grant's mom to see how she and the family were doing. I was concerned about the Texas wildfires near them. She thought I was calling about the Mosul headlines and asked if I had heard.

I hadn't. And I fell apart.

I hadn't heard from Grant for two days and now all the 'what ifs' came flooding in. Grant's mom comforted me and encouraged me to trust in the Lord. She was my Titus 2 woman, a beautiful example of strength and faith.

But in the darkness of the night, fear will threaten faith. I tried Grant's cell phone twice, listening to it ring over and over and over again. I emailed him, asking him just to let me know he was okay. I looked at the handwritten letter on the table I had just gotten in the mail that morning. I looked at the pictures of us on my desk. I cried. And I prayed.

Then in the middle of the night I heard the beep of an incoming text message on my phone-- "I'm ok." They had been on blackout with no phones or email due to the tragedy. My nightmare was over.

Yet for the families of those other five soldiers, the nightmare continues. In the same breath that I praise God and thank Him that my Grant is safe, I pray for them. While the fear is lifted from my heart, the ache remains because there are those who will not get an "I'm ok" text. Who do not get one more chance to say "I love you." Who never wanted their soldier to come home in this way.

On the eve of our beloved Lord's rising, it's so hard to think of the deaths of these heroes and the pain of their families. I don't understand it. I know that there is meaning in suffering. That we serve a God who brings healing and victory over death. And a God who knows what it is like to lose a Son. Yet some things seem unanswerable.

My man, my hero 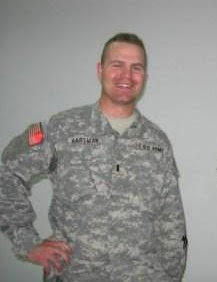 Last night I watched The Passion of the Christ with the teens at church. Even though I've seen it several times before, it was still able to touch me in a fresh and personal way. A way that reminded me of Jesus' humanity and what that means for me.

Seeing the character of Jesus in The Passion is unlike so many other portrayals of Jesus because, well, He just seems so...human. There is no aura of light surrounding him. No bright rays from heaven shining down upon him. No throne from which He rules.

He laughs with Mary in a scene from the past. And then He looks at her from beneath the cross with blood and sorrow in His eyes. He shares a meal with His friends. And then He watches them run away in the hour of darkness.

This is a God who knows what joy is. What heartache feels like. How laughter lifts us up. How pain weighs us down.

I realize not only does He understand this because He is an all-knowing God, but He understands because He became man. Because He took on flesh like my flesh, with a heart like my heart. He worked. He cried. He laughed. He knows what it is like to be human.